Liverpool have ranked among the top five clubs of the Deloitte Football Money League for the time in almost 20 years.

Liverpool’s stellar 2018/19 season has paved the way for them to break into the top five of European football’s money elite.

After winning the Champions League in 2019 and following that up with a first league title in 30 years last season, the success of Jurgen Klopp’s men has certainly had the desired effect for owners Fenway Sports Group, who have been able to leverage what has been achieved on the field to help them succeed off it.

The annual Deloitte Football Money League presents the financial state of European football’s elite, with this year’s report detailing the significant impact that the COVID-19 pandemic has had on the football economy.

Across the continent’s major leagues the impact of the pandemic has seen drops in broadcast revenue and matchday revenue, the latter owing to games being played behind closed doors for the final months of the season.

Although Barcelona is in crisis and verge of bankruptcy: €1,173m in debt, €730m in short-term, yet Barca is the leading the Deloitte Money League of the ten richest clubs in world football.

Real Madrid is the second richest football club in the Deloitte Football Money League while the champions of European Bayern Munich sits in the third place.

Liverpool is among the top 10 richest football clubs in 2020 for the first time in 20 years.

Here is the List of the top ten richest football clubs in 2020 Deloitte Football Money League: 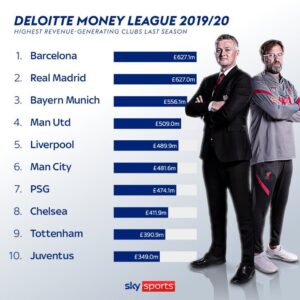